Firing on all cylinders: Medina-based Fire-Dex, LLC continues to carve out its niche as an industry leader.

Founded: 1983
Number of Employees In Medina County: 100+ employees live in Medina County.
Reason for coming to Medina County:
From the tax side, we [Fire-Dex] did get some tax incentives, but overall, we have had a good partnership with Medina – the city and the county.

Founded in 1983, Medina-based Fire-Dex is not only worldwide leader in the manufacturing of head-to-toe personal protective gear for fire fighters and first responders, but a model for healthy and steady business expansion. The company has continually expanded its fire protective gear offerings, prior to settling headquarters and manufacturing in Medina, operations were located in Rome, Georgia. The company dedicates time and resources to evolving its production model, enabling some of the shortest order turnaround times in the industry. 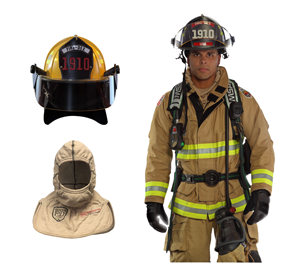 “We are constantly looking for ways to put more tools in our associates’ toolbox,” said John Karban, Vice President of Operations, regarding Fire-Dex’s ongoing training program available to its more than 130 employees and growing.
Production Manager, Ryan Holliday added that given the end-users of Fire-Dex products, having a production staff that is invested deeply in those products is vital.

“We can’t have a bad day – our products have to be perfect and there is accountability all through the (manufacturing) process,” Holliday said. “Our associates care about what they do.”

In fact, from the open floor plan of the production facility, to an associate engagement system called Opportunity for Improvement (OFI), to open door policies, Fire-Dex is notably employee driven.

With visual “score boards” to keep track of progress at team work stations throughout the Medina facility, employees also use this method as a system to monitor efficiency, ensuring quality at every point in the manufacturing process.

As a by-product of this approach, Holliday said, natural comradery and team-building among employees is fostered. Which, Holliday stressed, is vitally important in turning out properly constructed personal protective gear in an efficient and timely manner.

The name “Fire-Dex” originated from the company’s initial mission to manufacture welding and firefighting gloves with good dexterity. The business strategically grew in its first four years by adding more accessory items such as fire hoods, EMS apparel, and Wildland firefighting garments, and finally manufacturing structural turnout gear beginning in 1987. 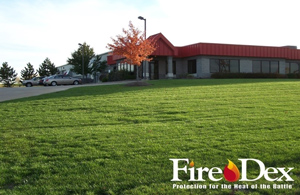 A decade later, in addition to building its current manufacturing facility and headquarters at 780 S. Progress Drive in Medina, Fire-Dex became the first manufacturer to offer head to toe personal protective products for firefighters under one brand.

Owner and CEO, Bill Burke, was hired in 1984 as a sales representative. By 1989, Burke had moved up to Vice President of Sales and Marketing, and in 1996 became President of Fire-Dex.

“At the time, we decided to build an apparel manufacturing (plant), most manufacturing was moving overseas,” Karban said. “To build one in the Northeast Ohio was pretty unheard of, but Bill was a Medina resident and determined to make this work.”

The out-of-the-box move was beneficial in both a business and civic sense, Karban said.

“From the tax side, we did get some tax incentives, but overall, we have had a good partnership with Medina – the city and the county,” he said.

The area’s strong economic development organizations and agencies, both within and outside local governments, Fire-Dex Human Resources Manager Jamie Marks said, help promote a business-friendly culture in which Fire-Dex has greatly benefitted.

“There are many great business-related and community partnership and collaborative resources in the community,” she said.

With only 10 to 15 companies in the fire protective gear industry worldwide, Karban said Fire-Dex is “one of the big four,” crediting its associates, quality, innovation, problem solving production model for much of its success.

Following a LEAN manufacturing roll-out in 2002, Fire-Dex employed a production system which is state of the art entirely focused on customer value.

The facility quickly grew from 6 to 18 teams. More recently, a second-shift team was added in 2015.

“I am extremely proud of our workforce,” said Karban. “The training really comes from one another and the team members’ average employment with us is seven years or more. In manufacturing, that is a pretty good average.”

Since its move to Medina 20 years ago, Fire-Dex has continued its expansion efforts. The company’s offices were remodeled twice, a testing lab was built in 2005, and Fire-Dex added the Para-Dex EMS and USAR gear brands to its production line.

Recognizing the health benefits of wearing lighter-weight gear when structural turnouts aren’t necessary, Fire-Dex acquired TECGEN PPE in September of 2015 as the latest addition to the Fire-Dex family of brands.

“Greater than 90 percent of calls are not for a fire,” Holliday said of Fire-Dex’s focus on solving problems faced by firefighters by responding directly to their needs. This mindset has led to the development of products such as pants with pre-bent knees and coats allowing extra movement in the shoulders for overhead lifting.

“It provides the comfort of a tank top with the sleeves added,” Karban said, adding that the company has more proprietary products coming in the near future.

For more information on Fire-Dex and to join its ongoing growth, visit the company’s website and employment openings at www.firedex.com.